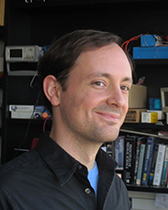 Our work aims to build mechanistic understanding of how the nervous system gives rise to movement. The patterns of muscle activation that drive movement reflect an interplay between neuronal circuits in the spinal cord and an array of brain regions that comprise the motor system. Yet how this interplay gives rise to the remarkable complexity, agility and precision of mammalian movement is poorly understood. This ambiguity stems largely from the historical challenge of characterizing interactions between neuronal populations in the motor system over the short timescale (milliseconds) on which the activity of muscles must be coordinated during movement.

Fortunately, a wealth of recent technical advances newly enable such characterization. Thanks to emerging physiological methods, we can now comprehensively assess activity across large motor system populations and observe correlations in activity between populations, which are important indicators of how populations interact. With new genetic tools, neural activity measurement and perturbation can be targeted to distinct subpopulations of neurons, which may represent the elemental units of motor system operation. And rapidly evolving data science methods can identify prominent patterns and salient effects in the measured activities of populations of neurons and muscles.

My lab uses these techniques to address questions like the following: