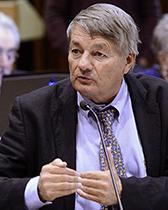 In addition to our work on rodents, we have established extensive collaborations with clinical researchers. Studies in humans are aimed at shifting the human clock in an attempt to alleviate mental and physical problems that are associated with disorders in circadian time-keeping, particularly in the elderly and in shift-workers. In addition, we are using both pharmacological and non-pharmacological approaches to determine if we can reverse the effects of aging on the circadian clock system in both rodents and humans. Our sleep, circadian and metabolic studies are focused on how disruption in these interactions can lead to obesity, diabetes CVD, and gastrointestinal disorders.